Festivals should feel safe and diverse. All party-goers can play a part in modelling a culture where everyone’s festival experience is valued and no one is made to feel uncomfortable.

Festivals should feel safe and diverse. All party-goers can play a part in modelling a culture where everyone’s festival experience is valued and no one is made to feel uncomfortable.

There is a rising movement globally to support positive change and acknowledge the experiences of those who are more at risk from incidents of sexual assault and harassment - typically, but not exclusively, women.

All Festivals have a zero-tolerance policy towards any kind of sexual assault or harassment. There is no evidence to suggest that more of these incidents take place at festivals, but organisers take this issue incredibly seriously in their planning and practices. This includes the provision of welfare services, 24 hour security on campsites and arenas and close working relationships with police and other relevant agencies.

If you or any of your friends experience any kind of sexual assault or harassment you should report it immediately and know that it will be taken very seriously by police and event organisers.

Consent means agreeing to do something. When it comes to sex, this means someone agreeing to take part in a sexual activity. Any form of sexual contact without consent is illegal whatever the age of the people involved. If you do not give consent and a person still engages in a sexual act, this is sexual assault or rape. Remember you shouldn’t ever feel pressured into any kind of sexual activity. It’s ok to say no or change your mind. (Read more about understanding consent and sexual health here).

Safety and protection are important (read more about how to avoid crime at festivals here), but there also needs to be a focus on the cause and prevention of harassment and assault. 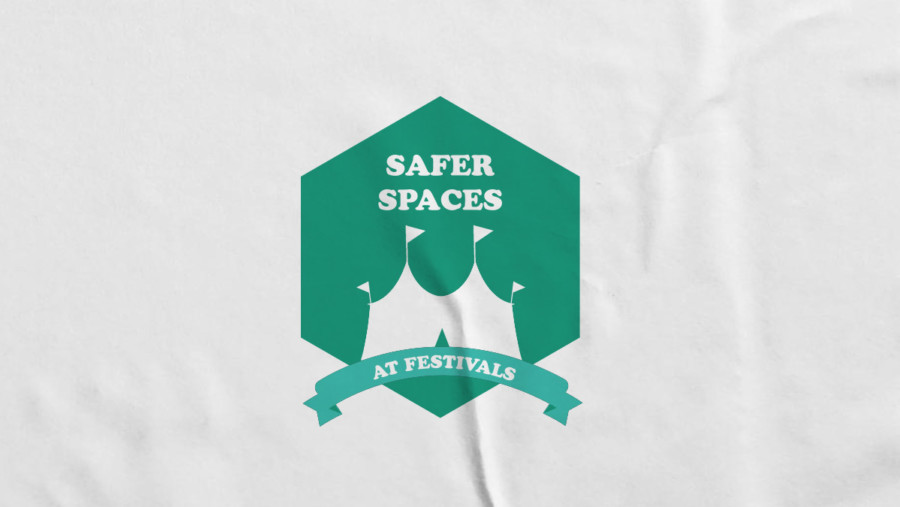 The Association of Independent Festivals Safer Spaces At Festivals campaign and charter of best practice relaunched in May 2022 to tackle sexual violence, harassment and assault at festivals. Over 100 festivals have signed up to the charter which states that all allegations of sexual harassment, assault and violence will be taken seriously, acted upon promptly and investigated.

The Safer Spaces campaign also encourages festival goers to play an active role in promoting safety by being an active bystander. 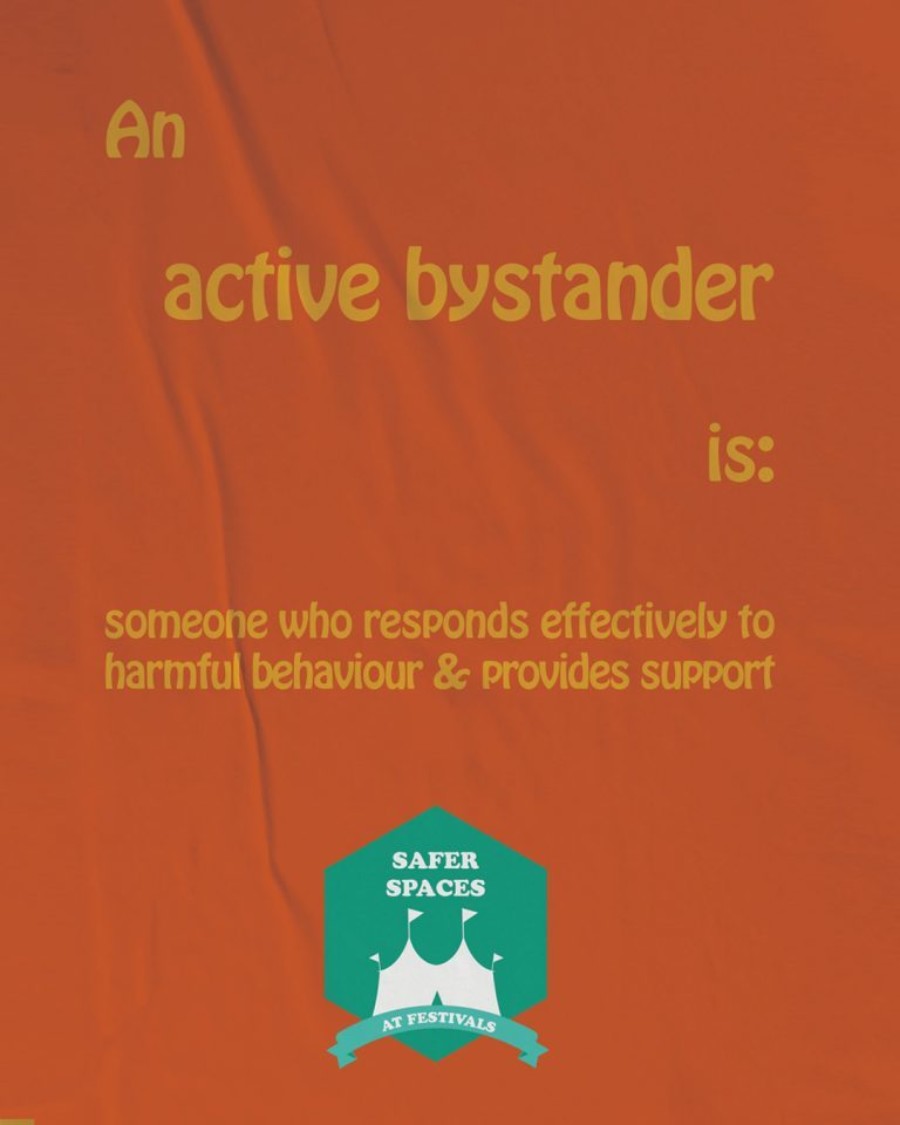 The 5 Ds of how to be an active bystander:

Enough is the government’s campaign aimed at tackling all forms of violence against women and girls. Visit gov.uk/enough to find out how to intervene safely if you witness any form of violence against women and girls, or how to get support or report if you have been a victim. There is also advice for individuals who may be worried about their own or someone else’s behaviour.

Creating a Culture of Respect

Within a festival community we should all help model a culture of respect. We can do this by looking out for each other and being aware of how our own behaviour can, sometimes unintentionally, make others feel. 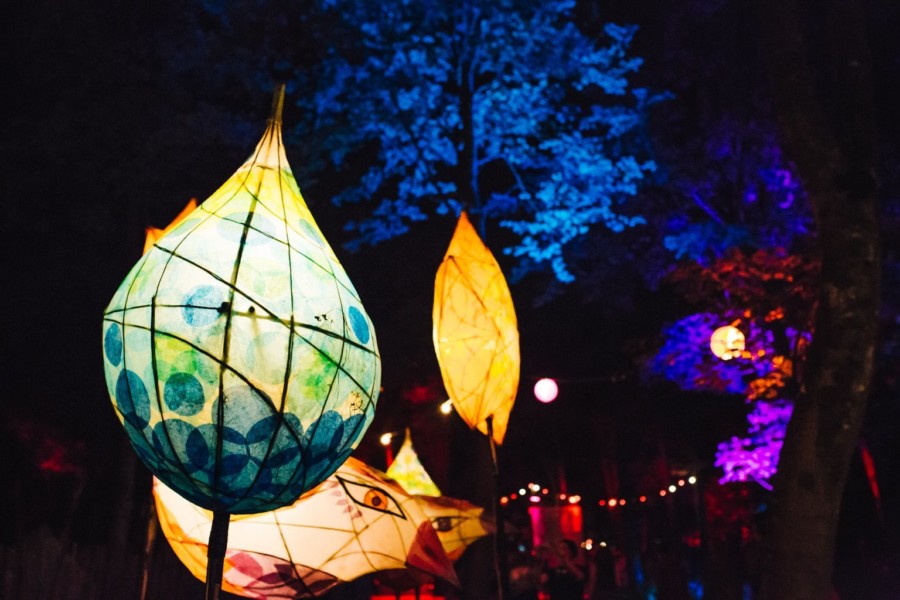 Spiking is when someone puts alcohol or other drugs into a person’s drink or body without their knowledge or consent.

Even if someone has been consensually taking alcohol or other drugs, spiking is never ok and never the victims fault. All blame and shame lies with the perpetrator.

Why are people spiked?

Someone may be spiked by an individual who is trying to incapacitate them in order to commit a crime including sexual assault or robbery.

According to the Sexual Offences Act 2003 spiking someone with the intention of overpowering them to enable sexual activity is a serious criminal offence which carries a prison sentence of up to 10 years, whether or not an assault actually took place. Read more about crime at festivals.

People are sometimes spiked by their friends as a prank or because they think they are doing them a ‘favour’ by giving them drugs.

You should never covertly give a friend alcohol or other drugs without their consent. This can be extremely dangerous.

How are people spiked?

Spiking can happen in a number of ways:

There has been a lot of media coverage about injection spiking in recent months, but there is very little evidence to suggest this is widespread or commonplace. Alcohol is still the most common substance used to spike people.

How can I tell if someone has been spiked?

Common symptoms of spiking include:

These symptoms can come into effect within 15 minutes, depending on what a person has been spiked with. Symptoms can last for several hours.

If you think someone has been spiked:

Spiking someone with drink or drugs without their consent or knowledge is a crime. As soon as the individual concerned has received medical support, report the incident to the police (either on site, or at the local police station). It’s really important to do this quickly so that evidence can be preserved and steps to identify the perpetrator can commence. If you have taken drugs voluntarily, please do not let that be a barrier to reporting.

At some events test kits may be available that can identify certain substances that are commonly used to spike people. If you are worried you have been spiked they may be able to provide one of these, however most kits only test for a restricted range of drugs and it is possible that a positive result may be missed.

If you think you see someone spiking a drink you should let the victim know before they consume any and report it to security. Point out the perpetrator to security, don't confront them yourself.

Ways to reduce the risk of being spiked:

There are a number of products that you can buy which claim to reduce the risk of spiking. Some events may have these available on site but you can also buy and bring them with you.

StopTopps are versatile drink-protectors that have been designed to deter drink-spiking. They are single-use foils that can be put over a drink, and are suitable for any drinking vessel including cans, bottles and glasses.

These products can be useful, but remember the most important thing is to stick with your friends, have a buddy system and look after each other. If it’s your first time at a festival, read more about what to expect and how to stay safe.

Drug facilitated sexual assault can occur when someone is spiked with the intention of committing a sexual crime or when a perpetrator takes advantage of someone’s vulnerability when they have consensually taken alcohol or other drugs, but are unable to consent to sexual activity. This can happen in a number of ways:

Sexual assault is never ok. If you or any of your friends experience this kind of behaviour you should report it immediately and know that it will be taken very seriously by police and event organisers. It doesn’t matter if you have chosen to take alcohol or other drugs, you will be listened to and given the support you need.

Over 100 festivals have signed the Safer Spaces at Festival Charter and are committed to delivering a safe environment for customers, staff and performers. This includes taking every allegation of sexual assault or violence seriously and taking a survivor-led approach that is underpinned with policies, procedures and training.

Festival organisers take reports of assault, harassment and spiking at events very seriously. If you experience this kind of behaviour, you should report it and feel confident that you will be believed and supported.

You can report incidents to any of the following on site at events:

If you experience a serious assault, whoever you report this to should escalate it immediately to the event management team who can contact the police.

The festival welfare team will have trained, caring professionals on site who can support anyone who experiences assault or harassment.

All festivals have slightly different rules. If you have any questions you should contact the organisers of the event that you are going to. Visit the event website for details of how to get in touch.

Festival Safe is aimed at people heading to UK festivals. Much of the information you'll find here will be useful wherever your event is being held, but if you are heading to an overseas event remember that rules, and in particular the law, can be different in other countries.

A festival is a community and we all need to play a part in keeping each other safe. It's important to be aware and remain alert so that you don’t become a target.

Looking After You & Your Friends

Whether it’s chucking it down or blazing sunshine, being outside, walking miles, camping and dancing will test anyone’s endurance skills. Make sure you look after your physical and mental health to stay on top form.